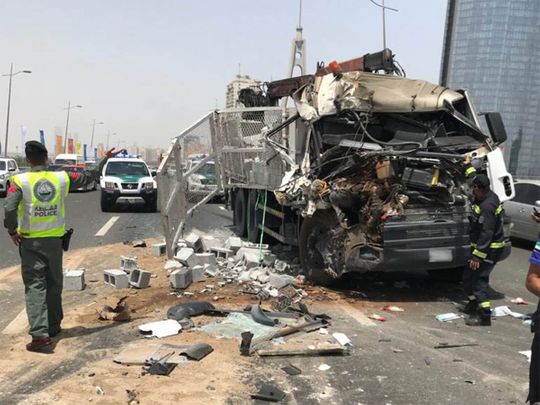 Dubai: Six people were injured in different traffic accidents in Dubai during the last 48 hours, an official said on Thursday.

Colonel Jumaa Bin Suwaidan, Deputy Director of Traffic Department at Dubai Police, said most accidents happened as the vehicles failed to keep enough distance between them or due to jaywalking and speeding.

“It was an accident between five vehicles that resulted in three moderate injuries. The accident happened due to speeding and not leaving enough distance between vehicles. The injured were taken to hospital for treatment,” said Col Bin Suwaidan in a statement.

The second accident happened on Wednesday night when a pedestrian tried to cross the road at a non-designated area and a minibus ran him over causing moderate injury.

“The third accident happened on Al Khail Road on Dubai Water Canal Bridge towards Deira, between a motorcycle and a vehicle. The motorcycle had failed in maintaining sufficient distance from the car ahead and crashed into it,” added Col Bin Suwaidan. The motorcyclist sustained a moderate injury and was transferred to hospital for treatment.

The fourth accident happened on Wednesday, too, on Sheikh Zayed Road, near the entrance to Marina Mall, when a lorry driver slowed down and reversed the vehicle against the flow of traffic to enter the mall’s parking lot and crashed into a motorcycle. “The crash left the motorcyclist severely injured,” he said.

The last accident involved two lorries on the Business Bay Crossing Bridge, in the direction of Sharjah. Not leaving enough distance between the two lorries resulted in the accident, causing minor injuries to one of the drivers and leaving one of the lorries severely damaged.